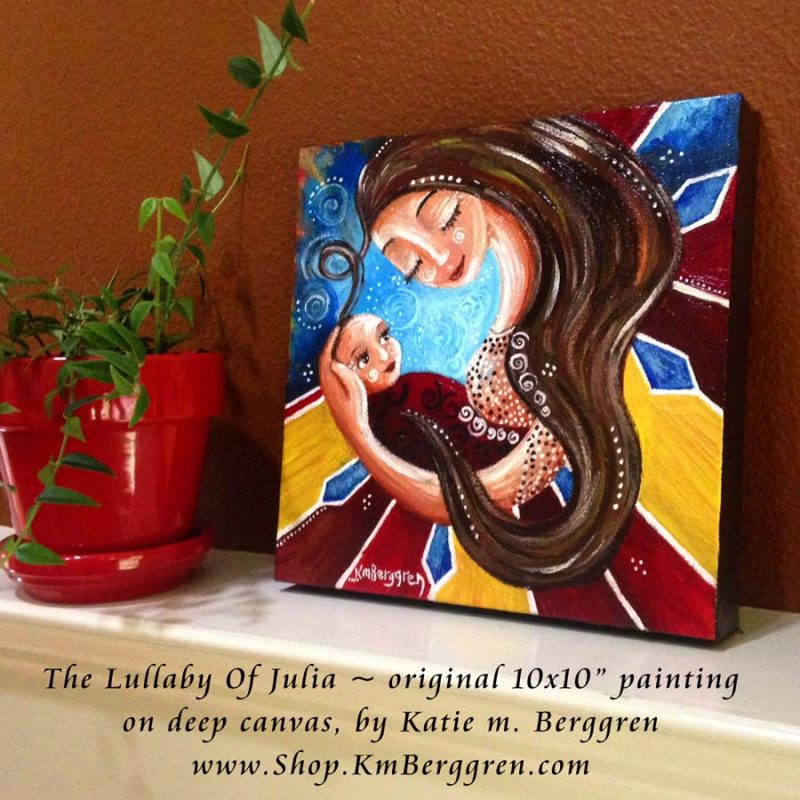 A stunning project a long time in the making… The Lullaby Of Julia ~ a collection of heart-touching Spanish/English Lullabies, composed by William Linthicum-Blackhorse, and performed by Kathryn Parsley. The above painting by Katie m. Berggren is the cover image of the CD and Music Book.

The buyer of this one-of-a-kind original painting (10×10”, $290) will receive a FREE CD of the beautiful lullabies, described below (the CD contains lullabies performed in both Spanish AND English): 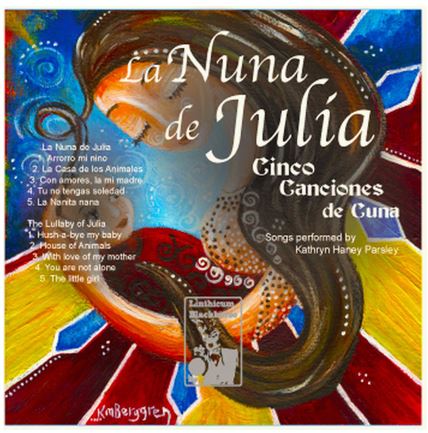 The Lullaby Of Julia: A beautiful story about a single mother and the hardships that we all face in life, La Nuna de Julia takes the life of a Latin-American mother and expands upon her legacy through the life of her son.

The story begins with Julia giving birth to a new baby boy with the traditional Mexican lullaby “Arrorró mi Niño” (Hush-a-bye my Baby).

The story jumps ahead 4 years to the Nanny’s home where the Nanny is playing a game with the children to wear them out before nap time using the song “La Casa de los Animales” (House of Animals).

Unfortunately for the son, Julia dies when he is a teenager.  He comes to the hospital where she is dying and sings the 16th century Spanish lullaby “Con Amores, la mi Madre” (With love for my Mother).

Later on in life he gets married and conceives a child.  He and his wife of only a few months head to the hospital to have the child.  During birth the mother has complications and ultimately has a stillborn child.  Time stops and Santa Muerte (the Angel of Death) comes for the child and consoles it into passing realms using the Nobel Prize winner Gabriela Mistral’s poem “Yo no Tengo Soledad” (I am not Alone), adapted into the song “Tú No Tengas Soledad” (You are not Alone).

The stillborn child was not the only birth in that room…. A twin was born.  She was a beautiful baby girl whom the couple named Julia to honor her grandmother, and she was lulled to sleep with an arrangement of the famous Latin-American lullaby “La Nanita Nana” (The Little Girl).

HEAR A SAMPLE OF THE MUSIC, HERE! 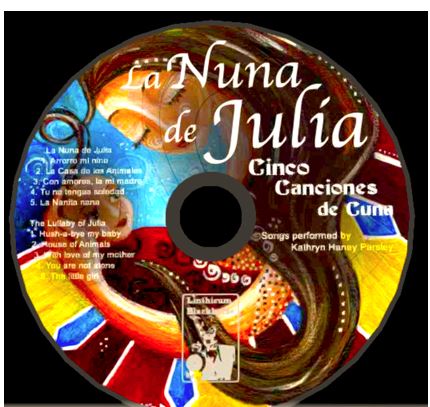 The Lullaby Of Julia – CD with art

Learn more about the composer (and purchase the music) here. 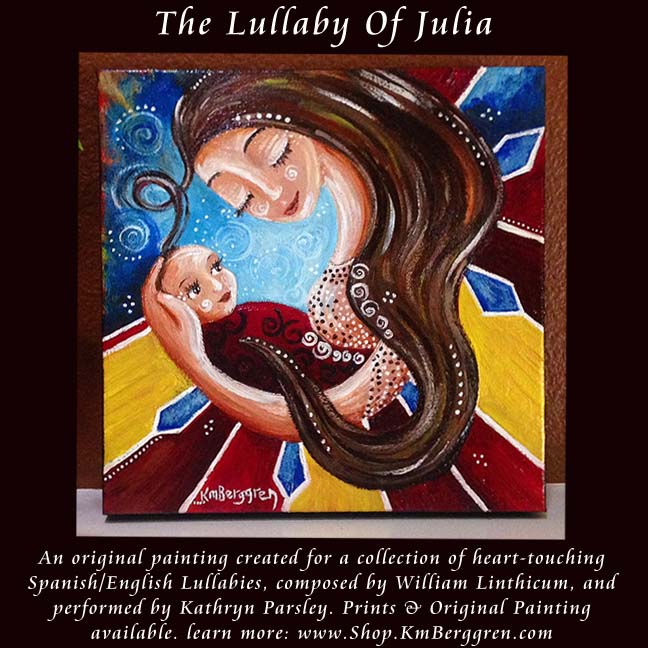 It was a pleasure working with William Linthicum-Blackhorse to create this artwork to package the beautiful music. Let me know if you have ANY questions!

The Music is written in a contemporary classical style in the form of a Song Cycle.  This is a collection of songs using poems from a known poet(s) and a known composer.  The music is designed to be sung by a Mezzo-Soprano (middle-high female voice).  Each song is sung from the perspective of a different character in the story which makes it a unique challenge for the artist performing.  At the end of the CD are two bonus tracks of the next CD that will be released, Piano Masterworks composed and performed by William Linthicum-Blackhorse.