Cart 0
This article was first published by Heather Von St. James. To follow her journey and read more insightful articles, check out her blog here.

Heather Von St. James offers a message of courage, inspiration and hope to those diagnosed with mesothelioma cancer. In fact she considers herself to be a “poster child for hope after mesothelioma” as she is now a 5 year survivor of this often fatal asbestos disease. This is her story of survival and hope.

Growing up, Heather Von St. James considered herself to be a “Daddy’s Girl”. Her father was a construction worker for a large construction and project management firm in South Dakota and he would often come home at the end of a workday with “white dust” on his clothes and boots. No one in the family thought anything of the dust that he brought home every day at the time, but it turned out to be a harmful asbestos dust from many of the products that he worked with on the job.

Diagnosed with Mesothelioma 3 Months after Daughter, Lily Rose, is Born

In August 2005, at the age of 36, Heather Von St. James gave birth to a daughter, Lily Rose. Within weeks of giving birth, Heather was consistently experiencing unusual and concerning symptoms including fever and difficulty breathing. Medical tests showed fluid around her lungs and a tumor on the pleura, a thin membrane that surrounds the lung. Further tests including a biopsy on the tumor and the fluid surrounding the lungs indicated that Heather had mesothelioma, a serious form of asbestos cancer, rarely seen in someone her age.

Heather and her husband, Cameron, were provided with three treatment options based on her diagnosis. If they did nothing, her life expectancy was estimated at 15 months. If she underwent conventional chemotherapy and radiation treatment doctors told her that she could expect to live for 5 years. The third option was the riskiest option but also one that held the greatest promise. It involved a surgical procedure called an extrapleural pneumonectomy through the International Mesothelioma Program with Dr. David Sugarbaker at the Brigham and Women’s Hospital in Boston. Heather and her husband were told that this surgery would involve removing the affected lung, pleura, diaphragm and pericardium. The good news was that the cancer had not yet spread to the lymph nodes. Without much hesitation at all, Heather and her husband told the doctors that they were choosing option 3 and they needed to get to Boston.

Surgery, Lung Leavin’ Day and the First Day of the Rest of Heather’s Life

Heather was scheduled to undergo surgery on February 2, 2006. Even though the world knows February 2 to be Groundhog Day, Heather’s sister affectionately renamed it “Lung Leavin” day. In preparation for the surgery, Heather and her family gathered together, wrote all of their fears down on paper and then “transformed” them by placing them into a ceremonial fire to watch them dissolve away. This day is still celebrated each year in February by Heather and her family and supporters.
The surgery went well. After an 18 day hospital stay, Heather stayed with her parents for two months. After that she returned home and received chemotherapy treatment every 3 weeks for 12 weeks. February 2, 2006 marked a huge turning point in Heather’s battle with mesothelioma and was, in many respects, the first day of the rest of her happy, healthy, cancer-free life. 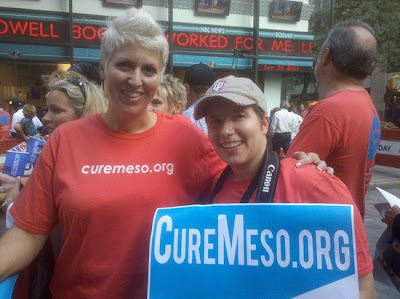 Faith, Gratitude and a Strong Will to Live are Keys to Healing

Heather Von St. James’ story of survival after a courageous battle with mesothelioma is an enormous inspiration to the entire mesothelioma community. In addition to the outstanding medical care that she received from her doctors in Boston, Heather indicates that a strong faith in God, the help and support of family and friends, a strong will to live and a strong sense of humor were key ingredients to her healing process and to her story of survival.

Today, Heather’s goal is to continue to be a beacon of hope for those suffering with mesothelioma. She continues to speak on behalf of the International Mesothelioma Program and Dr. David Sugarbaker and was recently a keynote speaker at the International Asbestos Awareness Conference sponsored by the Asbestos Disease Awareness Organization.

Kudos to Heather for the hope she shares.