Cart 0
Earth Mama ~ in honor of the stories… 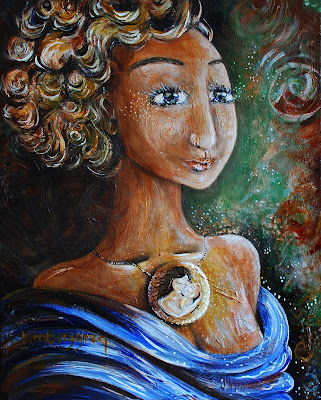 She had come to me before. This was, in truth, her fourth appearance in 3 years ~ though she’s changed a bit over the years ~ her hair has gained more flair and detail, her body more style.

Each time as she emerged onto a canvas, I was tricked in the beginning that she needed a distracted child against her. In this current composition, the indifference of their painted relationship, once again, required the child’s removal. 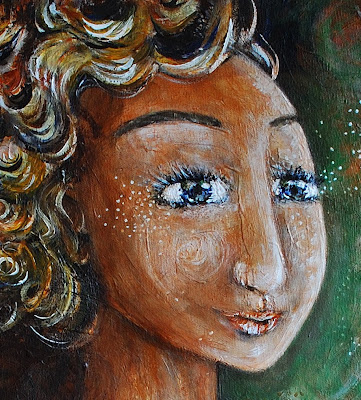 In the previous three paintings, the child was removed twice and stayed in the third ~ the distraction stayed as well in this third painting and though I knew from the beginning that that painting was meant to be special, in the end I had trouble connecting with it ~ I had failed to understand the message. To be honest, this painting awaits its finally-decided fate of repainting.

One painting proved successful as a lone woman and has gone off to live with a family. One hides unfinished in my closet. 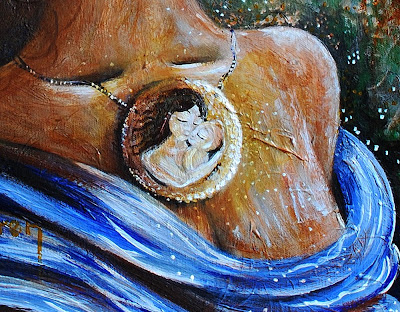 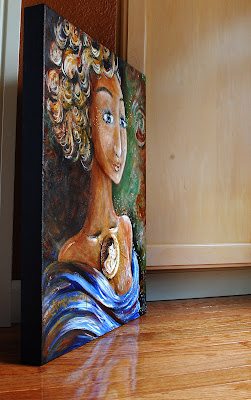 But the woman always starts out the same: she’s confident and eyeing me, testing me. This new solo woman has enticed me to continue working on her, though I love so much about her, deep down I wondered at the very beginning if she too would end up in the closet.

I enjoyed the process of highlighting her skin and defining her bare shoulders and smooth chest. I had determined, while painting her eyes, that she is coming out of apprehension, hiding her nerves with humor and mirth. She is whimsical, and she is a bit of an Earth Mama. Though there seemed, at first, no way to show her role as a mama, I knew from the beginning that she was one – thus the initial child no longer accompanying her.

I seriously wondered how she would fit in with the rest of my paintings, her being alone and all… 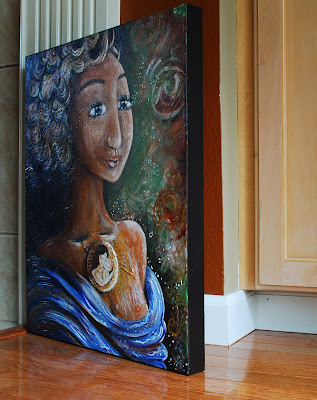 Then as I worked on her, I asked her why she’d come again and I wondered about her message. Her expression was unsure, but longed to be something more than indifferent.

Thinking out loud, I realized in only a second that I KNEW her purpose ~ and suddenly two pieces of a puzzle come together in a way that gave me chills…

Here is the first piece of the puzzle: Over the past three years, I’ve been approached by mamas whose motherhood was snuck from them as they lost their precious child at or just before birth. I have listened to their stories and have felt so hard for them. Two mothers in the last week, alone, have contacted me with their stories, and each detail saddens me.

When I was pregnant with my first son, I knew a woman who was also expecting her first child, we communicated via email. When my son was 2 weeks old and sleeping peacefully, I emailed to see how she was enjoying motherhood. She wrote back with a heart-chilling story of giving birth to a baby girl that she new was no longer living. The physical and emotional pain of birthing a beautiful baby that she could only hold for one afternoon.

The distress sent me to my son’s bedroom where I held him and rocked him and tearfully thanked all willing to hear that my son was safe and healthy. My friend’s story changed my life. She has since gone on to have another sweet daughter, and they talk to her of her older sister.

I have wanted to approach this soulful subject matter in a painting for a long time, as a way to honor those free souls, and the mamas whose babies left too soon… 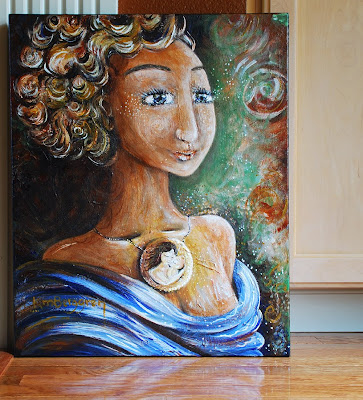 This new woman is the second piece of the puzzle: A true Oh My God moment occurred the night I realized this Earth Mama would carry her child’s spirit and memory in the form of an image, with her always, around her neck and close to her heart. In the form of a talisman.

As I sketched the large pendant across her open chest, unsure of the exact mother & child image it would contain, my indifferent no-longer-solo woman finally gave me a smile. 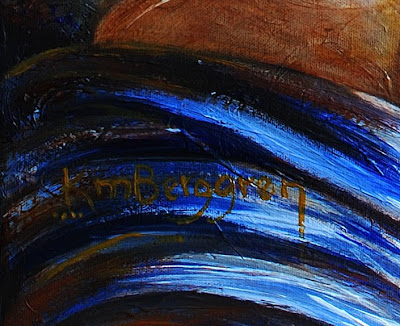 And now, upon her completion, this Earth Mama shares earth and fire with the sunshine around her neck, despite the blues draping her shoulders.

The Katie m. Berggren studio and office will be closed from January 29 through February 7 ~ back to business on Tuesday February 8! All items purchased in the Online Etsy shop during this time away will ship on February 8 ~ thank you!